THE RAZOR’S EDGE: a story about questioning the desires 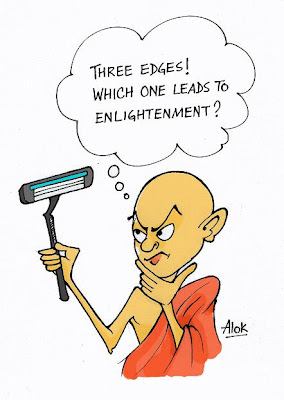 We have heard there is a right time for everything. I feel Somerset Maugham’s novel THE RAZOR’S EDGE has arrived in my life at the right time. After having a near death accident last year, I have been struggling with some questions which have shaken the mankind from time to time. The main character of this novel, Larry Darrell, goes through a similar situation in his life and takes an unconventional direction to find the answers. I could identify with him.
The novel’s name has been taken from THE KATHA UPANISHAD, an ancient and popular Indian spiritual text, which says that the spiritual path is as difficult as passing over a razor’s edge. The storyline is based on the nature’s law as told in the UPANISHADS that we are what our deepest desire is. Our life moulds itself according to what we really want from deep within. And that’s what finally happens with the four major characters of the novel.  They get what they were actually looking for irrespective of the fact whether their desires were constructive or self-destructive.
These four main characters represent some of the personalities we come across in our lives.Larry Darrell, who after seeing his best friend getting killed in front of his eyes in a war starts reanalyzing his life and what he wants from it. He questions the popular wisdom which says that life is truly lived by earning money, having a new car every year, having fun, and gaining a social status. If life can be lost in a moment without any warning, what is the real significance of what we are doing? That question keeps haunting him. So, he goes for a spiritual journey starting with ‘loafing’ in and ending in the monasteries of . After getting the answers he comes back to live in the real world because ‘it is easy to be a monk on a mountain top’. His character is similar to Nachiketa from THE KATHA UPANISHAD, who goes to Yama seeking the answers of questions on the same theme.
Isabel is the second character who is deeply in love with Larry. But when Larry tells her about his plans for a spiritual journey, she realizes that her love is deeper for a palatial house, diamond necklaces and a tamed rich husband. She leaves him and marries a man who matches her list of expectations. Life takes an unexpected course, and her husband loses all his money which leads to the kind of life she never wanted to live. Years later, when she meets Larry again she cannot curb her emotions. She tries her best to gain his love, and destroys the woman Larry was planning to marry. After doing all this, she cannot help singing about her ‘true love’ for Larry.
Sophie is the third character and the woman destroyed by Isabel. Life has been cruel to her from the very beginning. She loses her husband and son in an accident, making her extremely depressed. She drowns herself into drinking, drugs and meaningless sexual relationships. When she meets Larry, she gets one chance to start it again and rebuild her life. But Isabel comes in her path and seduces her back to drinking and self-destruction. Finally she dies a gruesome death.
Elliott is the fourth character whose only aim is to become a part of all aristocratic parties and brag about the furniture in his house and his family lineage. He befriends only those who can help him climb the ladder of social eminence, and looks down on those who are at the lower rungs of it.   On his deathbed, his major regret was that he was not invited at a Queen’s party happening in his city.
As the storyline comes to an end, all four characters get what they were looking for. Larry gets wisdom and happiness; Isabel gets back a luxurious life; Sophie gets death; and Elliott gets social eminence. Each of them is a success story. But the definition of success has varied from person to person.
The author nowhere demeans those who are after materialistic pursuits. Actually his attitude is more of an observer rather than a judge. These characters also put a strong contrast to Larry who takes a very rare and courageous direction in life.
THE RAZOE’S EDGE is a nice treat for those who are looking for meaning in life beyond materialistic pursuits. They may not get final answers here, but they may get a taste of what it’s like searching for the answers.  At the end of the book, there is a long conversation between the author and Larry where he shares what he found during his spiritual journey in . His findings are not merely based on the religious texts he has read, but also on the spiritual experiences he had during intensive meditation. To repeat, he is not the person who has just read about it, but the person who has also experienced it.
The book has also been adapted into movies twice. I feel both of them are very nicely made, but I liked the 1946 version more. It’s more extensive and covers the essence of the book in a much better way. The other version (starred by Bill Murray) skips a lot of things and changes the story a bit while taking creative leaps in adaptation.
**************************************************************************
The 1946 version movie available on youtube:  http://www.youtube.com/watch?v=yVrY4neM1Zs
Larry’s meeting with the Indian Guru:   http://www.youtube.com/watch?v=JnmdIKV1s6Q
Trailer of the movie starred by Bill Murray:   http://www.youtube.com/watch?v=9-cIUVgacaY
PDF copy of the book:   http://www.4shared.com/get/-lY1sFr0/W_Somerset_Maugham_The_Razors_.html
Something about the accident I had:   https://www.facebook.com/note.php?note_id=193996417312078
Posted by Alok at 11:23 AM 1 comment: