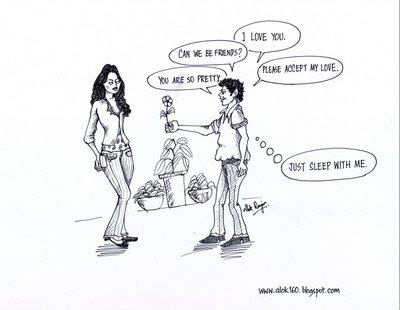 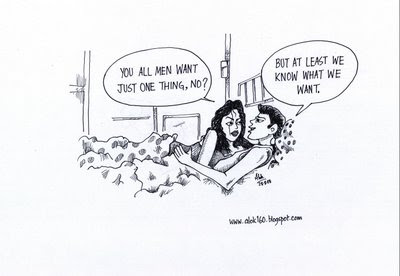 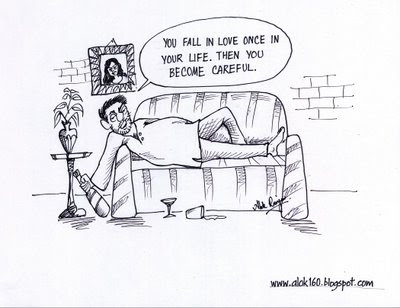 From Euphoria to Dysphoria

You must be having some hobbies. Hobbies like sleeping, dancing, watching films, listening to music etc.

Generally, when I make a cartoon I start feeling that I have produced something good, if not great. Well, that happens one moment after I finish making it. When I see that cartoon after one day, more often than not the euphoria remains there. 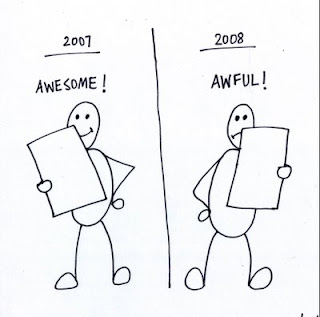 But why does it happen that my feelings change completely if I see the same creation after a long time, say one month or one year. What seemed to me a fine work of creation initially starts appearing shoddy and mediocre piece of work afterwards.

Why does it happen?

Did I find that work better then it was initially because I was too attached to it due to the emotions of a creator? And now, do I find it sheer mediocre because I can see it more objectively and impartially?

That could be one explanation.

The other explanation could be that I could have gone through a small mental evolution during that time period. My perspective has changed, and now I can’t see the same quality in my work I saw at the moment of creating it.

But the most plausible explanation could be quite different. It may not have anything to do with the objectivity of the creator or the quality of work. It’s just that as an artist I have a complex relationship with my artwork. I fall in love with it one moment and fall out of love the next moment. There’s no reason behind it. There’s no use of finding any reason behind it.

As an artist or a creator, I just need to understand this roller coaster of emotions and be comfortable with it.
Posted by Alok at 2:06 PM No comments: How to become Creative! 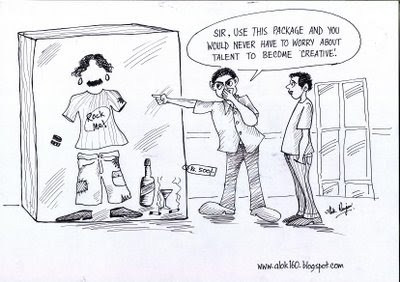 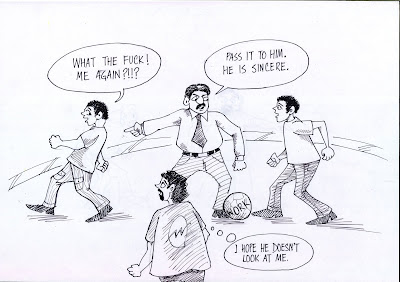 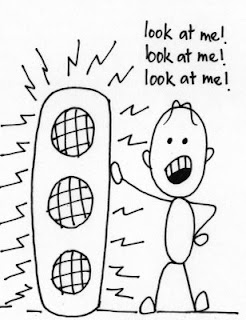 Has it ever happened to you?

You are working in your office, your eyes glued on the computer screen and your brain stuck in some problem. Then all of a sudden loud music starts pouring into your ears from a nearby cubicle. Ah, the guy has started playing some really cool song in a totally uncool volume.

You went to sleep late in the night, thanks to the pressures of the present work culture. It’s five in the morning, and your eyes open. No, you don’t the healthy habit of getting up early. It’s just a devotional song based on some popular filmi tune coming out from the loudspeaker of a temple that made you sit up.

You are sitting in a meeting, listening to the guy who is speaking. Then somebody’s cell starts singing. Hey, it’s a ring tone based on a Bollywood song, and the owner has kept the volume level at the highest.

So, the question arises. Does the office guy enjoy music more when it’s louder? Does the temple priest become more religious when songs come bursting out from the loud speaker? Does the meeting guy miss his calls if the ring tone is not at its volume highest?

Gosh! If I keep the volume higher, somebody is going to acknowledge my presence.

After all keeping the volume knob high is a smarter way of saying, “Look at me. Or I’d die.”
Posted by Alok at 12:39 PM No comments:

“Maine Gandhi Ko Nahin Mara” seemed to me a movie which looks very intelligent, innovative and classy on surface, but fails to give the meaningful impact you expected.

The first half of the film is about Professor Uttam Chaudhary losing his mental health and his family suffering because of it. Professor imagines that he has accidentally killed Gandhi. 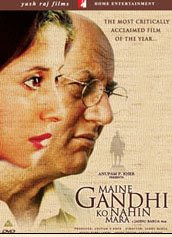 In the second half, we see him getting treated and ending up giving a small lecture on how everybody is killing Gandhi everyday by not following his ideals.

The story is nice. The movie has been beautifully made. The actors’ performances are impeccable. The director has kept the promise of making a “hatke” film.

But I wonder how significant Gandhi was in this film. If you ignore the last five minutes in which the professor gives a lecture in the courtroom, the movie has nothing to do with Gandhi and his ideals on a deeper level. It has more to with the trauma and frustrations of an old man who is suffering from dementia and the pains his family is going through.

Had the professor suffered because of some other reason than “accidentally killing Gandhi”, the movie would have been equally good.

As I understand, Gandhi was just a method to bring some interesting twist in the professor’s problem. Had he started assuming that he had killed a milkman, the movie wouldn’t have looked so intellectual.

Even the lecture by the professor, the only part actually relevant to Gandhi, was clichéd. We hear such pieces on every occasion of Independence Day and Republic Day when some speaker comes to preach about how India is nose-diving south.

I would treat this movie more as the story of a psychological illness case rather than taking a meaningful take on Gandhi.
Posted by Alok at 11:31 AM No comments: 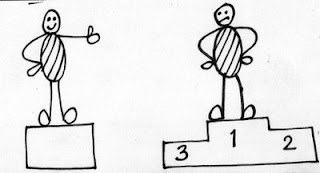 Imagine yourself being a painter. Imagine being a really good painter.

Now imagine yourself being a painter who has got a unique style. A style you discovered and share with nobody else.

Now go to the second part. Imagine yourself being a painter who does the best water colours. There are many others who do water colours, but you are just a little too good.
Which one excites you more: being unique or being the best?

If being a painter sounds a little difficult to you, shift this question to anything else you are good at. Music, writing, your expertise at office work or whatever.
If you ask me, I would love to be unique.

First, there is no competition in being unique. If somebody tries to copy you, still you’d be the first one to having reached there. There is a constant fear in being the best. The second best might be eyeing your position and can replace you anytime.

Second, I think there’s more innovativeness in being unique. It takes more originality to develop your own style than being better than others in a particular style.

We should find our way. No wise man ever suggested finding other’s way and becoming better than him. God designed unique fingerprints for all of us. He never designed the best fingerprint for anybody.

My Idea of Paradise

I have heard a lot about rivers of wine, gorgeous women serving you and a never-aging body. These are some of the ingredients of paradise as described by various religions.

But it’s not easy to reach there. First, you will have to die. Second, you will have to live a tough life before you die. A tough life means living honestly, doing no sin, having sex with only one woman, telling the truth, eating vegetarian etc. The list is long and pretty scary for those who believe in “living their lives to the fullest”.

Even if you fulfill all these conditions, there’s no guarantee that you’d reach the paradise of your dreams. There’s absolutely no guarantee. 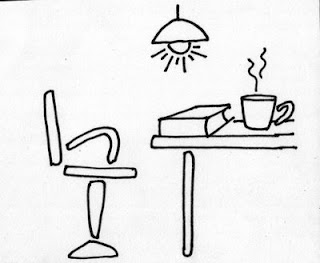 So, what’s the solution?

Maybe the solution is to discover your own paradise. Here, on this earth before you die.

But no, the solution is not complete. What if your idea of paradise is so difficult and unattainable that you die working hard throughout your life without entering its doors even once?

So, the complete solution is to have a very simple paradise where you can enter without doing lots of hard work.

My idea is to engross myself into an interesting book with a cup of coffee. The room must be cozy and there shouldn’t be any disturbance. And I am in my paradise.

What’s so glorifying about drinking and smoking? 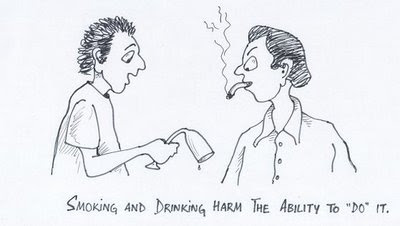 Well, if you don’t drink and go to a party, I guarantee you’d meet at least one gentleman, smelling like booze and cracking this joke.

But why does he come up with such jokes? After all, booze is not just a drink like the other ones. It’s a quick, sure-shot certificate of masculinity. Take a sip, and you turn macho into the eyes of the other drinking ones.

I wonder if it has to do anything with the Biological findings. They say drinking increases your desire for sex, but harms the ability to do it. Then why attach it with manliness!

Same for cigarettes. Decades ago, some advertising copywriter in New York was working on Marlboro cigarettes. He figured out that if he shows some cowboy with a fag between his lips, the sales would increase. They did, drastically.

Since then millions have been smoking under the notion that it makes them look more macho in the eyes of the fair sex. Well, it may make them look macho and it may not. Mainly depends upon the I.Q. level of the lady they are trying to attract.

What they forget is that this straight cigarette may harm their ability to keep it straight when the opportunity comes.

Now, who says stupidity is a forte of men only? There are, and will always be, women who think they can be better than men by copying them. So they have started drinking and smoking. If these things can turn men into real men, they can turn women into real women too. Can’t they?

Then there are the more enthusiastic ones. They have started overdoing it. And they look really cool, sexy and confident (to some people) when they are in their 20s or mid 30s. But after that things turn a little sad. The same people would say they look frustrated, bitchy, lonely and blah blah blah.

Down the line, anybody who believes in common sense might think what’s so cool about pumping alcohol and tobacco into your body. What’s so intelligent about replacing hemoglobin with booze and smoke in your veins?

I have no idea. Maybe Albert Einstein has. He said, “Two things are infinite: the universe and human stupidity; and I'm not sure about the universe.”

I think one should drink or smoke according to his choice. It’s cool. But it’s not cool to associate them with things they work against. And it’s also not cool to make fun of those who choose not to drink or smoke.

Smoking and drinking don’t make anybody smarter or cooler. So why be in such a fancy!
Posted by Alok at 2:34 PM No comments: